69% of Americans admit to using their smartphones in bathrooms.

“I can’t live without my phone!” Let’s face it, most of us are guilty of saying this. But maybe we’re taking it a bit too far. A recently conducted study revealed that majority of Americans are guilty of using their smartphones in bathrooms. Check out our infographic to learn more. 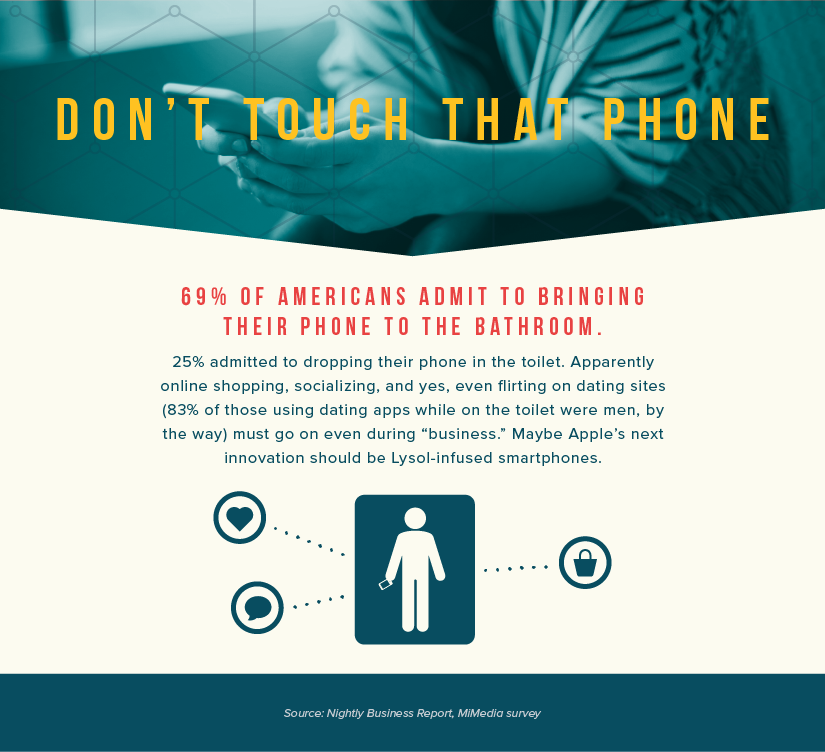 As the infographic above shows, a survey by MiMedia found that 69% of smartphone users bring their phones into the restroom. Broken down even further, the study found that more than 59% of users browse social media websites, 32% participate in online shopping, and 8% check their dating profiles–all from the comfort of the toilet seat.

Possibly the biggest surprise from the study is that 42% of users said they go to the bathroom specifically to use their smartphones. Apparently, strict anti-phone protocols at work and other public spaces drive many smartphone users to seek a more private area to browse.

Smartphones in bathrooms: Is this a big deal?

The answer to that question depends on one’s level of germophobia. However, opinions aside, studies have shown that smartphones are extremely germ-ridden. Scientists at the University of Arizona found that cell phones carry 10 times more bacteria than most toilet seats, and a 2011 study from the London School of Hygiene & Tropical Medicine found that one out of every six smartphones contained, er, toilet matter.

Research has varied on just how many germs are crawling on the average cell phone, but another recent study by the European Academy of HIV/AIDS and Infectious Diseases found more than 17,000 bacterial gene copies on the phones of high school students.

The good news, though, is that the vast majority of these germs are harmless. Human skin is naturally covered in certain microbes, and our bodies are used to a certain amount of micro-grime.

Bathroom germs, however, are not harmless. When toilets flush, they spread germs everywhere, which is how phones end up with fecal bacteria like E. coli. And every time you check a text or send an email on your phone, all the bacteria you’ve touched is transmitted straight to your screen.

Fortunately, there are easy ways to avoid these germs. The most obvious strategy is to avoid taking your phone to the bathroom with you in the first place. If you can’t resist the urge to scroll, we suggest touching up your phone with a disinfecting wipe every once in a while.